Today's game was one of those that could really have gone either way. Last year we saw how it can really go badly, and your team can completely fall apart to the 'new boys'. This time round Martinez would have been up and ready for what was coming at the lads, so set them up to win.

Well it didn't look like it would be a win for us, after the first few minutes we could hardly get a touch on the ball. Yet Norwich were unable to really get behind Caldwell and Lopez who held their own, till Lopez vacated the field to have a head injury treated too.

No real chances on goal came, till Di Santo managed to gain a dubious penalty. De Laet had been messing around with the ball on the edge of his box. Di Santo took the ball of the young defender and stormed toward the goal. De Laet caught up to Di Santo, who tumbled over. There could be questions of a touch on Di Santo. However Watson stepped up and smashed the penalty home.

No worries of a 4-0 drumming now, at least had one goal.

The first half continued with half heart chances from both sides. Moses looked dangerous dribbling through the Norwich defense at will even with three players marking him. Three shots went close from Moses, however none really troubling the Norwich keeper. While Ali had nothing to do, but shout at poor passes from his center backs.

However as is typical of Wigan, we couldn't hold out for long and rued our missed chances. After some sloppy pass from Gomez, who stood and stared as the Norwich winger sped past him and Lopez, who let him roll past him, slip a cross into the box. A deflection of Watson saw Ali only able to push the ball helplessly at the grateful feet of Wes Hoolahan.

However we picked ourselves back up, and nearly got back into the lead. Moses yet again wove is way through the Norwich defence wide on the right, chipped the ball into the box finding Di Santo. The Argentinia could only blast a header over the goal posts.

The second half brought a much better push from the Latics in terms of attack, Moses again got wide, whipped in a great cross. Di Santo glanced a header inches from goal, he was getting closer.

However he wasn't able to get any close, Connor Sammon and Hugo Rodallega came on form Gomez and Di Santo, this changed the game for Latics. We managed to find that extra bit of steel up front.

Rodallega hit the target twice, both balls rolling to either corner and forcing Ruddy (Norwich keeper) into some stretching saves. Sammon nearly got on to the end of one of such shots, Ruddy's hand grasping the ball quickly to stop the Irishman scoring.

Norwich really were unable to to cause much stress to Ali's goal. The only shot really to trouble Ali in the second half was flagged offside, after a great strike by Hoolahan, Ali parrying the ball out for a corner.

Wigan chances late on came first through a long ball over to Sammon who slipped the ball past both Norwich defence and keeper, who found Moses in the middle of the goal. However three Norwich players through themselves at the shot, which eventually came to Rodallega who's shot was again block.

The last best chance of the game fell to Watson, who let the ball from Rodallega roll across him and smash a strike straight against the Norwich keeper's right post. So close to winning the game, but yet so far.

Thus ended the game, and really neither side could be totally disappointed with a draw. Wigan were not in full flow, and could have fallen apart and lost the game, had Norwich really pushed the Latics defense any harder. However they were unable to and we came away with a point each. 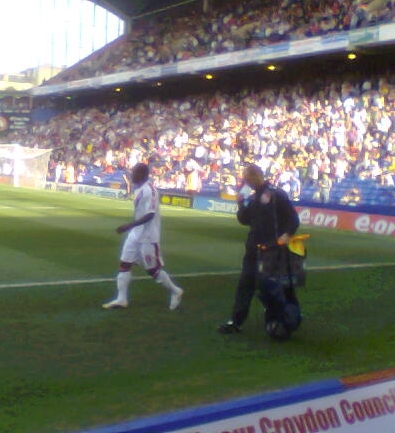 Man of the Match Performance From Moses

For the first day it is very good, and a much better improvement from last years battering at the hands of Blackpool. However three points should have been ours after some clear cut chances that the team had, especially from Di Santo, who looked out of form and had no conviction when in front of goal.

Next week against Swansea will be a intresting match, and if Martinez takes anything from today's game for next week. It is that we should start with Sammon and Rodallega up front. If he will? Only time can tell.

Moses was by far our best player, and looks ten times the player N'Zogbia was already. Every game he will grow and improve. His end product is not quite there yet, but his pace and ability to take player on and open up space is clear for all to see.

One thing is clear though, we still need to sign more players. Another striker is a must, the goals don't look like they may flow from the front line we currently have. A center back must be on the wish list, Caldwell looked good but sloppy at times, and Lopez at times was lost. Alcaraz's return is needed if not.

So it looks a good start, maybe not as good as we would all like. But can we moan? which would you really prefer, a 4-0 drumming or a 1-1 draw full of promise. I think we got the better deal today.