Share All sharing options for: Preview: Wigan vs Swansea

So after what was slightly disappointing opening game of the season, our attention is now finally moving towards the next match. The pull of the Premier League is well and truly in motion and the lure and first to see more is really starting to hit me. How I do hate a close season.

Swansea are a team not to be taken lightly for our second game. After a 4-0 defeat at the hands of a dazzling City, Swansea will look to bounce back against a manager they will really want to beat.

No match in the Premier League is easily, especially when you play a promoted side at their home ground for the first time. Yet none is quite sure how they will come out.

They could be very nervous and basically allow us to win the game, very much how QPR allowed Bolton to roll them over. Or you can be how we were on our first home game in the Premier League match the best pass for pass, and nearly win it.

However that isn't for our team to focus on, what we have to do is look at us and how we can improve. Last week against Norwich we still looked like we missed that killer edge up front. Di Santo missed three clear chances to score, and could have had us 3-1 by half time, and 4-1 after first five minutes of second half. The lad for me isn't good enough as an out-and-out striker.

Di Santo's work rate and effort are faultless he ran every inch of the pitch, and tried his absolute best to score. But when you are at the top of a game, you have to more than your best, you have to be the best. Di Santo isn't really there yet. Rodallega starting is a must at the Liberty Stadium.

At the back we looked okay, but at times a bit shaky. Any of the big teams would catch us out on a normal day, and we need to sort it out at center back. Lopez and Caldwell work well as individuals but don't have an out-and-out partnership. Untill Alcaraz returns Boyce should play center with Caldwell for me. But I'm not the manager. 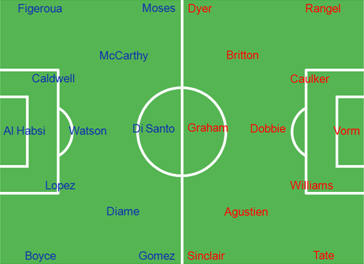 The Teams that Could Play at The Weekend

Swansea's man to watch is Scot Sinclair. The 20-year-old who spent the season previous on loan at Latics, flourished at Swansea in the Championship last season. Cutting in from the wing the player scored 19 goals for the team, including crucial goals in the play off final to help the swans gain promotion to the top flight.

Sinclair's mix of speed, tricky and ability make him a hard man to play against, and will be something the team will have to watch out for. He loves to run at players and either take a shot or cross on either foot. He was unable to get into the game at City, and our best bet is to isolate him wide on the wing forcing him to come inside to a pack midfield.

This won't be an easy second game, but it is a winnable one. We have to play to our best and we will gain something from it. All three points are a must though for me, we have to build on a solid draw last week and improve and push on. Getting Moses, Sammon and Rodallega together on the pitch for a good chunk of the game is a must. The three of them would start in attack if i had my way.

But i don't and Roberto knows more about Swansea and their way to play than me or any other Latics fan. So lets hope he can do what he needs to and get a win on Saturday.