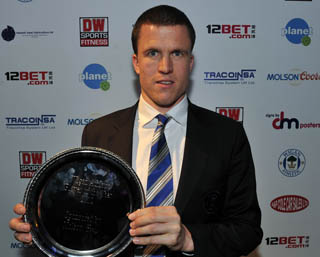 The clubs official end of season awards were on Wednesday night. And I should have put the results up before then, but anyway.

In the end the Fan's player of the season award went to Captain Marvelous Gary Caldwell who deserved the award for his second half of the season as he drove the team onto survival.

Other notable awards, saw Maynor Figueroa scoop the players player of the year. Something he has deserve for a good few years. Our Honduras left back has been a great club servant and continues to be in his new central role.

Emmerson Boyce won the outsanding achievement award for surpassing Paul Scharner's Premier League appearance record for the club. Our second longest surving player is one who doesn't shine in the lime light much, but is a player you want on your team.

Shaun Maloney was rewarded for his fantastic goal against Manchester United getting the goal of the season. That game was also given performance of the year, being the first time the club had ever taken points of United.

Tim Chow took the Young Player of the Year prize, while Youth Team player Ryan Meadows won the respected Micheal Millett award.Fan Brian Sabin received the Fan of the Year Award for continual loyal support of the club.While Neill Rimmer, Matt Jackson, Gary Sloane and Kenny Williams won the community award for their cycle ride from Wigan to Norwich in aid of the Emma Hoolin appeal.

Congratulations to all, they were very much deserved!