Season Preview: The Line Up

Share All sharing options for: Season Preview: The Line Up

I am going to break down my season previews into three this season. First looking at the starting eleven and how they will shape up in the formation and players that can fit into the varying different positions. The other two posts will be out later this week, one covering the key fixtures to watch, and the key players of the season. But before all that lets look at the squad and the eleven men that are likely to be the main men.

Last season Wigan's starting eleven changed weekly at the beginning of the season, and it caused a lot of problems to gain any sort of consistency and saw our streak of losing eight games on the trot. This season however there are likely to be less interruptions to the starting line up (no Hugo Rodallega and Antolin Alcaraz injuries to worry about).

So what is our strongest line up? And who will start against Chelsea? Because they are going to be two very different things.

Against Chelsea we are likely not to see either James McArthur and Maynor Figueroa who will miss out due to injury (for McArthur) and due to fatigue from playing at the Olympics (Figueroa).

The same formation will remain and we will look to introduce Ivan Ramis into English football. The defender will allow us to have another experienced defender play in the back three when one of them is absent much like Figueroa. As for McArthur I would imagine that Ben Watson will take the helm back in the midfield. 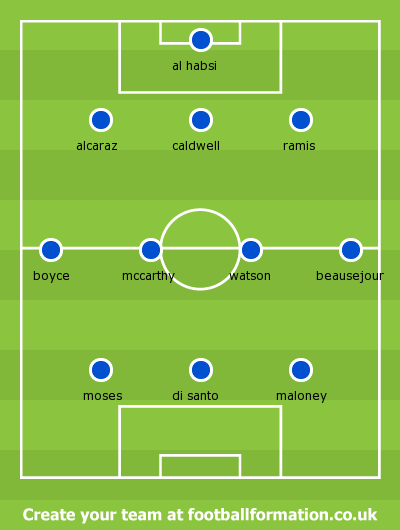 As ever the wide men will be the key to the game. To work as both defenders and attackers and if we are to sign another player this summer it must be another wing-back to cover Beausejour and Boyce. Although Ronnie Stam is expected to stay and push Emmerson Boyce out of the starting line up.

The formation is of course very flexible and allowed us to both attack and defend as and when needed. The key factor this season is going to be how the two midfielders work together, they have to be able to control the midfield, as they will be the area to come under attack this season.

Yet McCarthy is being tipped to continue is developed and continue to impress in his free midfield role. Having the likes of Ben Watson and David Jones, as cover or even playing, adds added ability to move the ball about and work the ball into good goal-scoring positions.

As for scoring goals. Wigan need to hope that Di Santo can continue to keep increasing his strike rate. For me Di Santo has to looked to break the 10 goal barrier this season. Anywhere around 12 would be a fantastic tally for the forward. Where the rest of the goals will come from, none can tell. If Moses stays at the club, Victor as well must aim for the 10 goal mark, that would then justify being linked with Chelsea.

If Moses does leave the club this season, you have to wonder who will take his place as the second man behind Di Santo. If you saw what happened on Sunday. Marou Boselli played behind Di Santo for the first time, and it is something that I think could work really well. Di Santo can work with the physical side of the English game and Boselli can handle the technical goal-scoring side. It could be a very potent partnership (more to come on the two Argentinians).

So not a lot of change for the start of the season. But why change something that was so good? It need continual tweaks but anything major could upset the balance and rhythm that the team picked up so easily last season.

Note: Did anyone notice what Manchester City did against Chelsea. The 3-4-3 formation with two wing-backs and two players playing behind a main striker. Sound familiar? Well who would have guessed that the champions of England would copy Wigan!