Off the back of Owen Coyle signing as our new manager I took a dash over to the Lion of Vienna Suite to hope I would find someone who would give me some good news. If anything what they have had to say is making me more and more worried.

At SB Nation the Lion of Vienna Suite is one of the best websites on the market for anything to do with Bolton Wanderers. One of the mangers over there Mark Yesilevskiy answered a few questions for me to get the background on our new gaffer the initial reading doesn't look good.

Pie Eaters Footie: You took Coyle off the clutches of one of your local rivals Burnley. At the time how did you feel about the appointment of the former Bolton player?

Lion of Vienna Suite: At the time, Owen Coyle was a very welcome change. Compared to Gary Megson's Black Death style of management and general appeal, Owen Coyle was the renaissance, a man that came in and played (relatively) attractive football and ultimately instilled both the team and fans with confidence. The fact that he was a former Bolton player helped his cause and he was part of one of Bolton's most memorable eras.

PEF: Surviving well in your first season, second season you took mid-table comfortably. What was the expectation going into the 2011/12 season?

LVS: The second season was, for all intents and purposes, incredible. Bolton Wanderers pushed towards Europe for much of the campaign on the back of Stu Holden, who emerged as one of the Premier League's best central midfielders (according to the Guardian). Unfortunately, following Holden's injury, it all fell apart and Bolton quickly slid from 6th place to 14th. A last day loss against Manchester City dropped the Trotters a few spots in the table, denying them a top half finish. 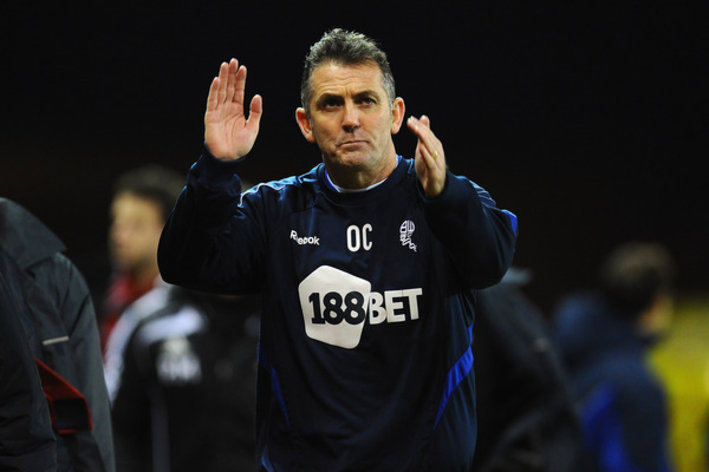 We all fully expected to get Stu Holden back in September of the 2011/12 season following his knee injury at Manchester United in March of the previous season. Bolton were dealt a couple of big blows before the season even started with the departure of Johan Elmander (who, while not great, knew how to score a good goal or two) on a free and two leg breaks in the summer: Chung-Yong Lee's in a friendly and Tyrone Mears' in training. In September, following a 90-minute Carling Cup return against Aston Villa, we found out that Holden's injury was worse than imagined and he would sit out for another year-and-a-half. In March, the Fabrice Muamba incident happened. Nothing went right for Bolton Wanderers and the final day of the season epitomized that with Jonathan Walters bundling Adam Bogdan into the back of the net for Stoke's opening goal before Peter Crouch dove to win a penalty for Stoke's second.

PEF: Following relegation Coyle stayed on at Bolton, what was the feeling amongst the supporters? Did they feel it was Coyle's fault and a new manager should have been in place?

LVS: Many did feel that it was Coyle's fault and that he should have been fired. The board was happy enough to recognize the aforementioned injuries though and gave Owen Coyle a bit of leeway. We had hoped, like Dave Whelan is now, that Coyle's Burnley experience would help him carry a team through the Championship and back to the Premier League. There were worries during pre-season as we lost to the likes Hamilton Academical and Portsmouth and drew Ayr United, Falkirk, and Crewe Alexandra. The season itself started off poorly with a 0-2 loss away to Burnley and didn't get much better from there. Bolton lost in the Capital One Cup to Crawley Town, giving up a pair of goals in the last seven minutes (which would become a theme last season). After taking 11 points from 10 games to start the season, Owen Coyle was sacked.

PEF: Reading a lot of your work at the Lion of Vienna Suite, it seems to have come to the forefront that Coyle's fitness regimes and staff where under performing at the club. How damaging has Coyle's time at Bolton really been to the club?

LVS: There had long been jokes about how Coyle's training sessions with the Trotters were nothing more than a giant table tennis tournament. In short, his training regiments were beyond damaging for Bolton and it's taken a lot of work from Dougie Freedman to undo the destruction. In March, Sam Ricketts did a brief interview with the Bolton News, discussing training at Bolton under Dougie:

"There's different types of training, physically we train hard at times for fitness, but also tactically, and you can see we're much more aware now as a side.

"The way we defend, the way we attack, we have game plans for each individual game. That's what the manager brought into the club."

It really makes you wonder just what it was that they were doing before that. On top of that, Bolton Wanderers had far too many injuries for it to be coincidence. One of the things that Dougie is concentrating on this summer is a complete rework of the medical department.

Bolton Wanderers had far too many injuries for it to be coincidence. Mark Yesilevskiy

If I was a Wigan fan, I would also have all my fingers and toes crossed that Coyle does not bring his compatriots Phil Hughes and Sandy Stewart with him to join his backroom staff. I'm typically a glass-half-full kind of guy but those two were some of the most inept assistants ever. They offered quite literally nothing.

PEF: Attractive football is the style Coyle always sets out for his teams. How well did he implement it at Bolton? Did the players take straight away to the style and keep to it?

LVS: You have to understand that we were coming from a long spell of Big Sam Allardyce long ball followed by Gary Megson's bore-them-to-death tactics so by comparison, a dog playing fetch with a tennis ball on the pitch would have been considered attractive. That said, Bolton Wanderers did play some lovely football, especially in that 2010/11 run. The thing is though that most of that play ran through Stu Holden and his box-to-box style. With the likes of Kevin Davies in the side, Coyle often reverted to long ball to suit the forward. The issue was that he really did not instill discipline in the side and thus, there was no reason for them to play a set style.

Its doesn't look good Wigan fans. Owen Coyle seems inept at keeping his players fit, which for a season which will have a minimum of 56 games we need everyone firing on all cylinders. But like I have said before and will continue to say lets keep positive and give the manager a chance to really bed into the team and shape them the way he wants them to be. Lets not make a judgement about a man before his team for the club has even kicked a football for us.