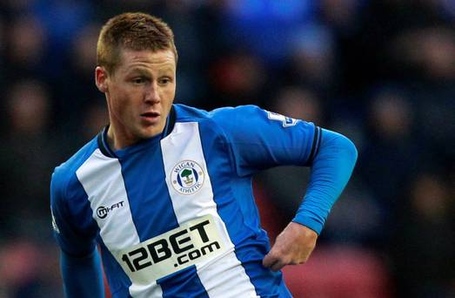 Probably the best player at Wigan Athletic. Will our Midfield work-horse being wearing the blue and white stripes next year? His speech at the FA Cup parade suggests that he will be.

The 22 year-old has had an impressive couple of season at the DW Stadium and this has attracted intrest from various clubs including Arsenal, Liverpool, Roberto Martinez's new team Everton and some reports suggest linking McCarthy with a move to the Chmapions, Manchester United.

McCarthy was a regular in Roberto Martinez's plans last season, making 42 appearances for the Latics chipping in with 3 goals from the centre of the park. Roberto Martinez who was hailed by McCarthy as 'A tactical genius' payed £1.2 million pounds for the Scottish born, Irish central midfielder from Hamilton Academical, McCarthy putting pen to paper on a 5 year deal.

McCarthy m,ade the trip south but struggled to break into the first team, making a string of substitution appearances but eventually making his first team appearance against Wolves in January 2010. After an impressive string of performances at the start of the 2010 season saw his season holted when he picked up a serious ankle ligament in a 50/50 tackle with Fabrice Muamba against Bolton Wanderers in October. This injury saw him out for 3 months but returned to action asap at the back end of January against Aston Villa.

In the past two seasons, James McCarthy has established himself as a hard-working work horse midfielder who will charge about the field hassling midfielders, not scared to get stuck into a tackle whilst being labelled as a midfielder with a fierce drive that stings the palms of goalkeepers.

The midfielder who has been part of the list of players that has been strongly linked with a move away from the Latics, had a £20 million pound price tag slapped on him by Roberto Martinez before his departure to Everton, showed signs that Wigan are trying to keep hold of the midfielder, with reported bids coming in for the player from various 'big clubs'. But he might have (involuntary) thrown a spanner in the works by reportedly telling Wish Fm:

With Arouna Kone's long awaited move to Everton set to be completed in the near future, could McCarthy follow in his footsteps and be disturbed by a change in manager? I think he will stay, the hefty price tag could deter clubs from attempting to lure McCarthy away from the DW Stadium. If McCarthy will be wearing the proud blue and white stripes next season, he is sure to play a key role in Wigan Athletic's promotion chances. Surely being part of the Spine of the Latics, and a firm fan favourite will convince the 22 year old to stay? with McCarthy being strongly linked with a move away, does this indicate that Owen Coyle will be in contact with Macnhester United again for another season loan of a player?

The Latics and United have built up a link in the past few years with Wigan loaning players such as Tom Cleverley and Angelo Henriquez. Will Owen Coyle enquire about the availibility of Nick Powell? The young central midfielder isn't to be feautured in David Moyes' plans at Old Trafford this season but with the Latics looking at possible replacements for McCarthy, could this see Henriquez returning and bringing Powell with him? Hopefully Coyle is willing to fight to keep McCarthy at the DW and get us back to the Premier League.