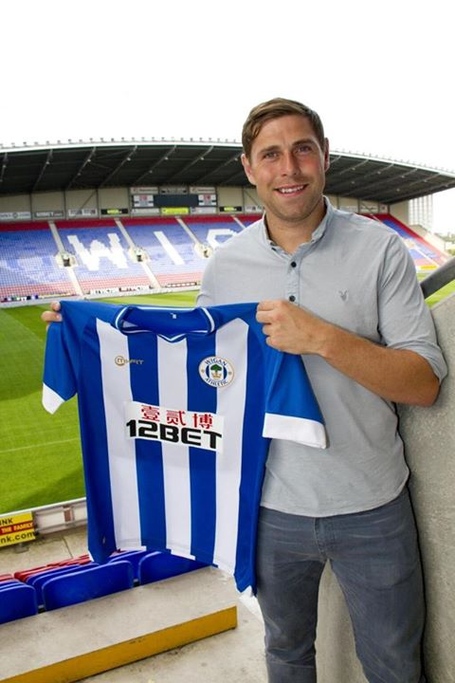 Holt put pen to paper on a 3 year deal.

Grant Holt's eagerly anticipated move to the DW was finalized today. But is he the correct replacement for Arouna Kone?

Grant Holt made the move up north today to become Wigan Athletic's new number 9 and presumably lead the attack, the reportedly £2 million fee was enough to pry away the 32 year-old from Norwich City. The question on everyones lips is... is he the correct choice to lead the Latics front line to get us back up to the Premier League?

It's fair to say in our recent years, Wigan have had a problem up front, we've haven't 12 goal a season man since Henri Camara and even that isn't the proudest records. We haven't had prolific scorers in all our time in the top division with such front men as Emile Heskey, Jason Roberts, Amr Zaki and even for unbelievable style, our all time top scorer Hugo Rodallega wasn't the most prolific goal scorer with 24 goals during his time at Wigan. I think we all want Grant Holt to be a 20 goal a season man, which will be a significant improvement on what looked like a striking solution last year of Arouna Kone.

Coyle said he wanted to sign 2 or 3 new strikes, this was due to the departures of all 3 recognized strikers, Mauro Boselli, Franco Di Santo and Arouna Kone. With Marc Antoine Fortune and Grant Holt now wearing the Blue and White stripes he might use the likes of Filipe Orsula as a 'back up'

This signing i think has been Owen Coyle's best yet during his brief spell so far at the DW, all be it, it's looking like a temporary one, Holt being 32 years old and looking like he's on his way out and Coyle's only reason for signing Holt is to get us back up to the Premier League.Holt coming to Wigan for £2 million might seem a bit over the top for an 'decent' Premier League player, but if he plays a major part next year in getting us promoted then in my opnion, you can't put a price on success.

Holt was unhappy with his position at Carrow Road, maybe due to fall-outs with Chris Hughton but I think he was disturbed with the arrivals of Kei Kamara and Luciano Becchio. Holt was prepared to take a wage cut to speed up his move away from the Canaries, he had this to say about his move to Wigan:

"The Europa League was a massive pull for me, It's something I've never done in my career and I'm hoping we can have a good spell in that."
"This is a great move for me. I've got a three-year deal with a club that wants to get back into the Premier League and a lot of people know I've been keen to get back up north as I've got older.''

He has made a name for himself by being a hard-working striker who bullies defenders, wins headers and is a clinical finisher, the former Nottingham Forest, Norwich City and Shrewsbury hit man has bagged himself an impressive 177 goals in 444 appearances expanding over his 12 year career.

With arrivals coming in at the DW coming in thick and fast, Owen Coyle is now lining up his third and final striker, reports have come in today he is readying a bid for FC Utrecht striker Jacob Mulenga. If this is to be a done deal in the near future, it sees a competition really hotting up on who will lead the Latics line next year. In my view it will be Our new signing, Holt. Coyle being a particular admirer of wingers, common sense dictates that it will be Holt leading the line. With the services available of Callum Mcmanaman, Shaun Maloney and Jean Beausejour, an ideal front man of someone to use his head to great effect and be on the end of crosses is just what Coyle has made as his seventh summer signing.

I really hope Holt does well, there are some doubters due to his age and price we payed for him but Coyle has an eye for shrewd signings such as Jack Wilshere, Daniel Sturridge and Stuart Holden whilst being in charge at Bolton Wanderers, Grant Holt I hope will be added to that list. Lets hope Holt had an 'off season' last year and can re-find his form from his opening year in the Premier League.