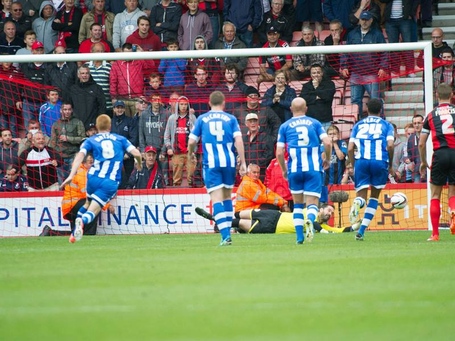 Wigan's poor first half performance proved costly as they suffered a 1-0 defeat to Bournemouth as the Cherries got their revenge from their FA Cup 3rd round replay defeat back in January at the hands of the Latics.

The Latics arrived at Dean Court with a positive vibe as they reminisced back to the Mauro Boselli goal in the 3rd round replay Wigan needed to dispatch Bournemouth back when the two teams were 2 divisions apart to place them into a fourth round tie with Macclesfield Town. Bournemouth came back off a 6-1 thumping they recieved at the hands of Troy Deeney and Watford, set the atmosphere of the afternoon with Wigan looking firm favorites. The Cherries proved everyone wrong and reiterated the point that in this grueling league... anyone can beat anyone.

Wigan made one change to the team that lost to Manchester United at Wembley last week. Jean Beausejour came back into the squad replacing James McClean to revert back to the line up that won 4-0 at Barnsley 2 weeks ago. The starting 11 that faced Bournemouth was Scott Carson in goal, a back four of Emmerson Boyce, James Perch, Leon Barnett and Stephen Crainey. A midfield 5 of Ben Watson, James McArthur, James McCarthy, Shaun Maloney and Beausejour looking to support Grant Holt up front in what looked like a 4-5-1 formation Coyle looks like adopting this year.

Wigan could have made the worst possible start as James McArthur sold Carson short with a back pass as Ryan Fraser stole in but Lewis Grabban couldn't capitalize as his shot clipped Scott Carson's legs taking the sting out of the shot which gave McArthur enough time to scramble back and deny Grabban's attempt from rolling into an empty net. Wigan woke up looking dangerous on the counter but they couldn't make pressure pay as McCarthy came close with a long range drive was tipped over the bar by Bournemouth stopper Ryan Alsop. The steady drizzle down on the south coast made it a very open game but neither side controlling the play as their were a series of passes going a stray in the first half both teams making mstakes.

2 minutes before the break, Wigan Athletic made a costly error as again Scott Carson was again sold short by a back pass this time from James Perch. Lewis Grabban stole in, rounded the keeper and rolled the ball into an empty net to give the hosts probably a well deserved lead going into break much to Owen Coyle's discontent. The Scot surely had something to say to the players in the dressing room.

The restart saw the game spark to life as Bournemouth had a glorious chance to double their lead and maybe put the game beyond doubt and cause an upset. Jean Beausejour wrestled with Bournemouth front man Brett Pitman on the edge of the area before referee Graham Scott pointed to the spot. Pitman stepped up but Carson dived low to his left to palm away Brett Pitman's spot kick to keep Latics in the game at 1-0. Latics boss Owen Coyle decided to try and Change the game adding more width and attacking play as he brought on McClean and Mcmanaman.The England u20 international only lasted 5 minutes after replacing James McArthur and Jean Beausejour when he was shown a debatable red card for a controversial tackle on Brett Pitman right in front of the dugout which sparked fury from Coyle as he clearly didn't agree with the decision. He had this to say in his interview with BBC SPORT:

""I was one yard from the incident and Callum clearly won the ball. There is no doubt his momentum took him into the lad. I will certainly be appealing.If someone beats me fair and square I will hold my hand up, but I am not convinced that happened today. I thought the penalty award was soft as well and it seemed every decision that was given today went against Wigan Athletic but that is the way it can go sometimes."

Coyle clearly felt that the referee's performance today was very poor but Bournemouth boss Eddie Howe expressed other wise in his interview with BBC SPORT showing his delight in his side's 1-0 win over the FA Cup holders:

"There were some naughty tackles in the game in the build-up to the red card. I thought it was a high challenge and his exuberance took him in a bit quick. I don't think it was malicious but I think it was a red card. He doesn't have a reputation, referees judge the tackles on their merit."

The red card looked to have popped Wigan's balloon then for the afternoon as from then on never seriously looked like getting back on term, although Marc Pugh needed to clear Leon Barnett's effort from a corner. Bournemouth nearly pounced again on another lazy back pass sold Carson short but Bournemouth closed out the win comfortably to preserve their 100% win record at Dean Court. Wigan's game was maybe an alarm bell for Owen Coyle as they were poor on the ball, wasteful in front of goal with their few chances on goal and sloppy at the back.

The defeat leaves the Latics in mid table on 3 points with a game in hand as they prepare for the visit of Doncaster Rovers on Tuesday Night as the Boys in Blue look to bounce back from this unexpected defeat. A win on Tuesday night would see the Latics hop above Bournemouth on goal difference. Coyle will get the team in at training on Monday morning and identify the key areas we lacked in today, the lack of accuracy in our short ball work today and our next to none urgency we had at the back today.