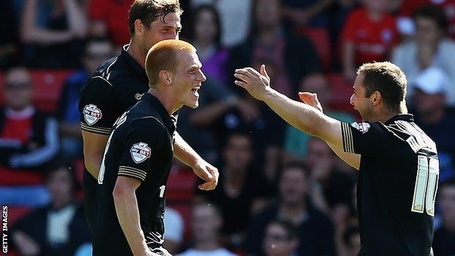 Latics began their Championship campaign with what seemed like a very comfortable 4-0 away win yesterday at 10 man Barnsley. As Wigan made an impressive start in their bid for promotion against the predicted South Yorkshire Strugglers.

Wigan arrived at Oakwell as favourites and they started the game as predicted. The Latics began the game seeing a lot of the ball and dictating the pace of the game due to the great control of the middle three of James McArthur, Ben Watson and James McCarthy. Callum Mcmanaman was named on the bench for the Latics due to the ankle injury he picked up at the back end of last season against Arsenal not being 100%. Jean Beausejour came in to the side to accompany new boy Grant Holt and Shaun Maloney in a new look Wigan Athletic side. There was also a place in the starting line up for Emmerson Boyce and new boys Leon Barnett, Stephen Crainey, James Perch and Scott Carson.

Barnsley's resurgent form at the back end of last season was something Owen Coyle had to be wary about, The Tykes realized they had to play at a high intensity and attempt to match the Latics on the same level.

The majority of play was being played inside the Barnsley half, a fast, ugly, tempestuous first half saw the first clear cut chance come for the Latics as Barnsley stopper Luke Steele denied Shaun Maloney's low drive but then 8 minutes from the break, the passing game we had adopted under Roberto Martinez payed off, as Stephen Crainey found Ben Watson half way inside the Barnsley half, the FA Cup winner found himself in acres of space, the Tykes defence failed to close him down They were punished as Watson let a low 25 yard drive go and bury itself in the bottom corner of Luke Steele's net.

The Latics resumed the second half what they thought as business as usual.They quickly got a foothold in the game and controlling large parts of the field. James McArthur coming closest, beating Luke Steele but his chance was cleared off the line. Soon after Latics doubled their lead as Grant Holt got a goal on his competitive debut and opened his scoring account for the season as he steered in Emmerson Boyce's cross come shot.

Emotions flew high mid way through the second half as Barnsley new boy Dale Jennings, who made his move from Bayern Munich to Oakwell, was sent off for a malicious 2 footed tackle on James McArthur, 5 minutes after coming on. This sparked fury from the players and started the traditional pushing and shoving before the referee quietened things down and ordered the players to put their handbags away.

10 minutes from time, a swooping Shaun Maloney corner was stabbed home by debutant Leon Barnett sealing the points for the Latics, who with another one of Coyle's summer signings James Perch, never looked like loosing it at the back for the Latics in South Yorkshire. The refreshed Latics' back line looked very promising possibly leaving Owen Coyle with a difficult choice dilemma with returns of Gary Caldwell, Thomas Rogne and very rare species you might remember called Ivan Ramis, whom hasn't been sighted since January.

Adding further insult to injury, 2 minutes before the final whistle. Star man Shaun Maloney got the goal he well deserved, exchanging neat passes with another new man Marc-Antoine Fortune, before the former Celtic and West Brom man squared a killer ball across the six yard box for his former Celtic team mate Maloney to tap in to an empty net. He added Wigan's fourth of the afternoon but some might argue it could have been more if it weren't for the acrobatics of Luke Steele, who in turn denied Wigan another 3 or 4, it could have been an embarrassing day for the Yorkshire men. Coyle had this to say to The Football League Show:

"I've got to say, I applaud the fans. We sold the allocation, they came they were colorful, they were vocal. They got behind the players and they really responded to that."

The result fires The Latics to the top of the table on goal difference with another 9 teams such as new promoted Yoevil Town and Bournemouth beating Millwall and Charlton also recently relegated QPR and Reading claiming victories against Sheffield Wednesday and Ipswich respectively. The drubbing Barnsley received at the hands of Wigan Athletic sees them lying rock bottom but no where near in danger due to this being the opening game.

Next weekend sees no league game for Wigan as the whole town prepares for a third trip down to Wembley to face Manchester United in the Community Shield for David Moyes' first game in charge.